The Ebla clay tablets provided researchers with a wealth of information on cultural practices and myths, court affairs, ancient languages, foreign and domestic affairs and policies of the ancient city of Ebla between 2500 BC and the destruction of the site in 2250 BC. In addition, these clay tablets provide key evidence of controversial Bible stories.

A new source of suggestive evidence for studies of Bible stories and Abrahamic traditions has been found in the contents of the Ebla clay tablets. Discovered in 1975 by University of Rome professor Paolo Matthiae and his team of archaeologists, the tablets were unearthed at the site where the ancient city of Ebla once stood. It is the current location of a village called Tell Mardikh, in northern Syria.

Finds in ancient Ebla included around 1,500 intact wedge-shaped clay tablets and thousands of other pieces and fragments of varying sizes and shapes. The tablets were found in a room containing the royal archives of Ebla, which have remained intact since the destruction of the city 4,500 years ago. According to David Noël Freedman,

“A preliminary reading of batches of tablets clearly established that these were the archives of the royal palace of ancient Ebla. one hundred to one hundred and fifty years in the middle of the third millennium BC.

Topics on the shelves

Overall, Ebla clay tablets are of great cultural significance as they give us information reflecting commercial interests, business activities, diplomatic and foreign relations, city economy, business domestic and cultural issues. Unlike other important inscriptions of the time, the tablets contained almost no text on military matters. Among the valuable information recorded, a tablet indicated, for example, that the city had a prosperous population of around 260,000 citizens. 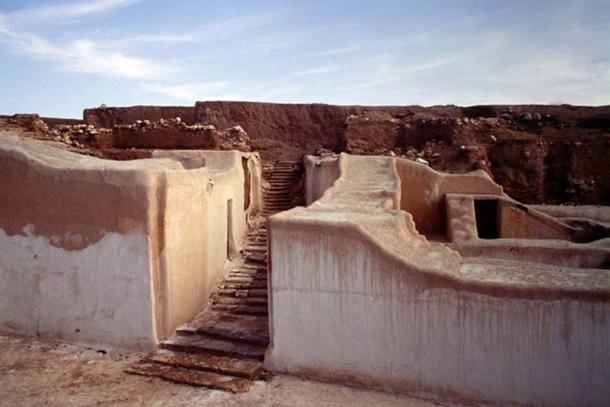 In this regard, it is relevant to note that some of the tablets dealt with legal proceedings. There are details of the penalties incurred when a person is injured, and there are details of various trials. The tablets depict a civilization some 1,000 years earlier than that of Moses, which provided important written information on the administration of justice. It was clearly a highly developed civilization, with concepts of justice and individual rights in the foreground.

While the majority of the tablets deal with economic matters and other business transactions, others describe topics such as offerings to the gods, rituals, and legends. As Clifford Wilson writes,

“There are literary texts with mythological backgrounds, incantations, collections of proverbs and hymns to various deities. Rituals associated with the gods are mentioned, many of these gods being known in Babylonian literature from a later period. These include Enki, Enlil, Utu, lnana, Tiamut, Marduk and Nadu ”.

The Ebla tablets were written in two languages, Sumerian and a hitherto unknown Semitic dialect which scholars have named Eblaite. The discovery of the ancient language initiated an academic debate concerning the origins of this new dialect, and whether it came from the Eastern Semitic branch, Akkadian, or from a Western Semitic branch linking it to the Canaanite language. The writing is considered a hybrid, adopting partial Sumerian words and partial characters that express syllables in the local vernacular. David Noel Freedman explained that,

“There are 114 vocabulary lists in the two languages ​​which will provide a very comprehensive glossary for the study of other texts and the Bible. Individual items will ultimately affect the interpretation of almost every page of the Hebrew Bible as we go along. as research continues. ” 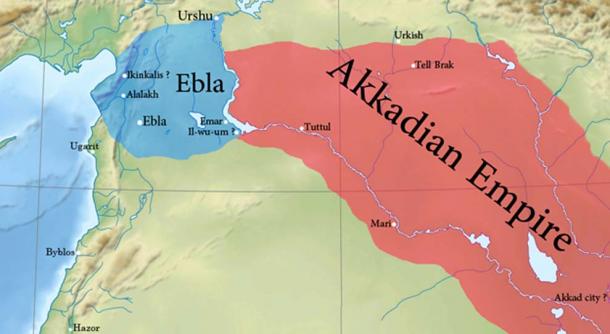 Approximate borders of Ebla and the Akkad empire in the second kingdom. ( CC BY-SA 4.0 )

Suggestive evidence from the Bible

The names of places and people found in the tablets have aroused substantial interest among scholars. There is a large area of ​​overlapping information between the Ebla tablets and the biblical text. Among the many personal names found both in the Bible and in the tablets are: Abram, David, Esau, Ishmael, Israel, Micah, Michael, and Saul. The tablets also contained the name Yeah, the short version of Yahweh, the personal name of the God of Israel.

The name of the places is also of great importance, especially since Ebla, located west of the Euphrates, was mainly oriented to the south and west, and therefore the commerce of the city and d Other concerns strongly overlapped with those of Biblical territory.

Another remarkable discovery came with the mention of Sinai in the tablets. It was surprising for a number of reasons, including the suggestion that it could be a town on the coast, and simply the mention of it. This may have an impact on what was previously thought about the location of Mount Sinai in relation to the stories of the Exodus. There are different theories regarding the location of Mount Sinai. According to Dr. Freedman’s studies, it appears that the occurrence of the name Sinai found in the tablet, which predates the time of Moses, would indicate his attachment to the region prior to the time of the Prophet. 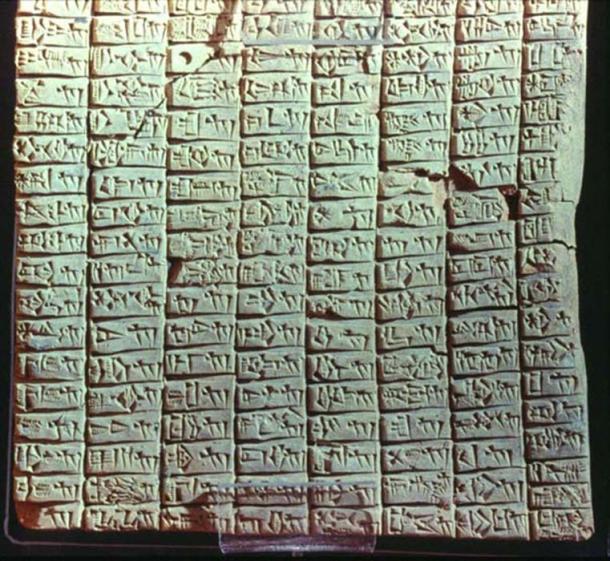 One of the Ebla tablets. ( A candlestick )

Professor Giovanni Pettinato, also an epigraph of the University of Rome, thinks he has found something very significant on one of the Ebla tablets containing information on the geographical names – including those of the five cities of the plain (Sodom , Gomorrah, Admah, Zeboim and Bela). The five cities of the plain are mentioned together as a league of five cities in a single chapter of the Bible, Genesis 14. This might suggest some type of connection between the list in Genesis 14 and the list on the tablet of Ebla.

This detail is important because it means that the person who wrote the story in Genesis 14 had access to the same information as that found in this tablet of Ebla. Most scholars agree with the theory that Genesis 14 was written much later – but it might shed new light on information supporting, for the first time, contact between Genesis 14 and outside authentic information. The historicity of the Ebla tablet would not pose any problem since it contained a simple commercial text, and not just legends or mythological tales. 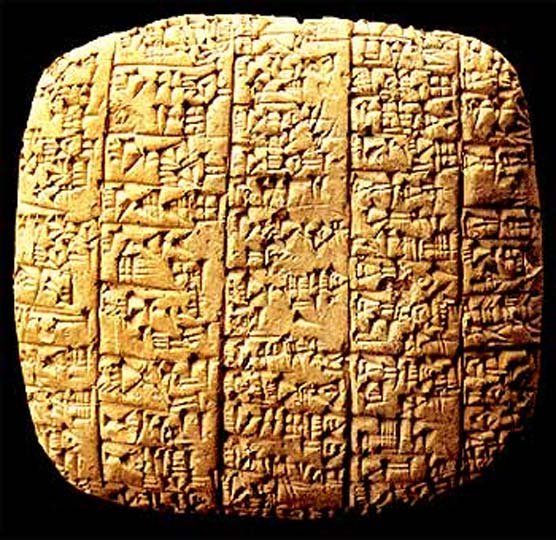 A tablet from the archives. ( Public domain )

The destruction of cities is probably one of the most unfortunate and common events in the ancient Near East region. Most of them were rebuilt before being destroyed again. Ebla was one of the sites that suffered this fate, but luckily many tablets have survived to tell us past stories and provide new evidence for the study of Bible stories – an often controversial area.

Freedman, David Noel, “The Tablets of Ebla and the Tradition of Abraham” (1978). https://rsc.byu.edu/archived/reflections-mormonism-judaeo-christian-parallels/5-ebla-tablets-and-abraham-tradition

Benner, Jeff A., ‘The Ebla Archives and the Bible’
http://www.ancient-hebrew.org/bible_ebla.html

Next Sacrament of Confirmation: Biblical Evidence

Texas Debt Consolidation: How to Get a Personal Loan 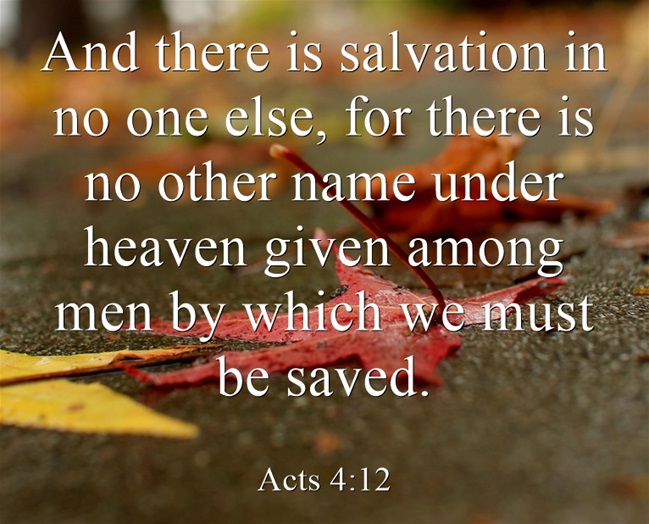 What does Jehovah mean? A Bible Study on Jehovah’s Word